Walk with Dogs: The Story of a Dog

He was a Christmas puppy, kept secret at a sister’s house until Santa could place him under their tree.

They lived in a house that The Counting Mutant grew up in. The Mutant’s Father had two boys. His Mother had two boys. They got married and had him. All told, five boys. This family of boys moved into a newish house of three bedrooms. It did not take long before the Father decided to make the house fit his family. Plans drawn, boys helped and grew up in that house. At the neighborhood swimming pool, life long friendships were forged. Four older brothers grew up and left the nest.

Not needing a house to fit five boys, the parents decided to move into a house that fit their family. The house was sold to another family.

That family grew up in that molded house. Those Parents moved and one Son stayed to fill it with his own family. This man’s wife was my sister’s friend.

That Christmas puppy was a Dachshund. Not a toy, or a mini, but a Standard sized Dachshund. His natural instincts were strong. Bred to hunt badgers in their den, the breed is tenacious, intelligent, sensitive and funny.

This puppy lived in a house a Father built. That The Counting Mutant spent his childhood in. 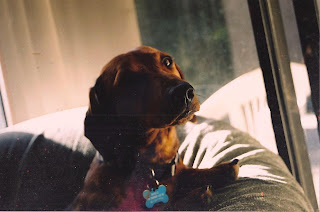 All of his natural behaviors-living in a house in a family filled with toddlers-became too much to handle. The family asked my sister if she would like him. She said yes. This Dachshund puppy, now a year old dog, joined two Australian Shepherds. This adventurous pack of three romped, went on long walks. The Shepherds would return to the call of their master like good herding dogs. The Dachshund focused on the hunt and not hearing his master’s call, would track his prey until found, then wait. The Dachshund would jump on beds and snuggle little ones, guarding their dreams.

And in another house filled with toddlers, the Dachshund didn’t fit. He didn’t take correction well. Was hard to control on long walks and struggled with house training. It was time for him to find a new home.

We had just said goodbye to a we fostered for a few years while another sister was in the armed forces. Our quiet house missed a snuggle buddy. We happily accepted this quirky Dachshund and called him Roscoe.

This Dachshund who spent puppy years in a house The Counting Mutant grew up in. They were soul mates.

Built like a mini Schwarzenegger, Roscoe would bounce up and down the stairs. Leap the recliner in a single bound. Happily snuggle with a book reader. He loved to sing “Happy Birthday.” The daily mile or two walk was the highpoint of his day. Older kids in our house made the house training issues a simple fix. 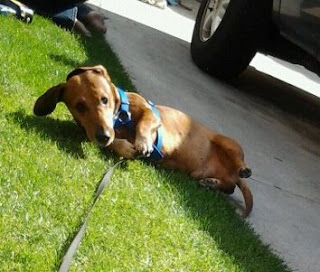 All of this jumping had a price. Dachshunds are prone to back problems because they are structured as a regularly sized dog on itty bitty legs. Chiropractic added two years to his life. At age 11 it was a hernia that pushed him over the edge.

Head sagging, and asking to go home, Roscoe’s walk became his chore instead of a joy. Sleeping more and playing less became his routine. Last night for a final Happy Birthday chorus we learned he couldn't even do that. On the first note, his song became howls of pain and we all knew: it was time to say goodbye. Keeping him would be selfish.

This morning we said goodbye to our friend. The Counting Mutant said goodbye to a common history and memory. We are relieved he is at peace and bouncing somewhere in wild, open fields. Hunting to his heart’s content and pleasing his Master.
Posted by froginparis at 2:58 PM