“I can’t wait for Friday!  It will be the coolest thing ever.” April said to Elysse at lunch.  We sat next to the chain link fence at the end of the corridor.  Brown bags crackled as we pulled out our lunch.  In 7th grade, these girls were the first school friends I made since moving to  in the 3rd grade.  They really wanted to sit and talk with me.  It was nice to feel accepted.

“What are you talking about?” I asked.

“THE Rocky Horror Picture Show! It’s playing at midnight and we get to go. It’s so cool!  You get to dress up and yell at the screen and throw food and spray people.  It’s so funny.” April gushed.

“Cool,” I faked.  It sounded fun, but I was sure it would be forbidden.

At home I asked my parents about it. I received the typical lecture, explaining the demonic presence lurking and waiting to infuse my soul with chains of bondage. By the time it was over, I pictured demons sitting next to people, throwing food with them and entering their bodies to possess them. Fear overtook my thoughts.

The next few weeks I continued to sit with April and Elysse at lunch. Each day a looming presence weighed on my conscience. Thoughts of what might be controlling their minds and how it would affect my spirit, consumed me. I became afraid of them. Soon lunch was a lonely hour for me again.

My parents’ concern for our Christianity included the treatment of Halloween. Radio preachers who would urge listeners to avoid it altogether. Its origins seeped in deep mysterious magic and the occult. Participation would guarantee evil’s consumption, or at least interference, of a soul. God could not work if evil existed in
one’s life. Your Salvation could be compromised. My parents disallowed the night revelries. I could participate at school so that we wouldn't be mistaken for Jehovah’s Witnesses, but that was all. Some years the light was turned out when Trick or Treaters came through the neighborhood. Other years found my Mom passing out gospel tracts laced with candy. The pumpkins carved with a fish or a cross beamed from the front porch. Before the night was over, someone would take them and smash them to bits in the street. Mom said it was just the Devil trying to discourage us.

As a young adult, I met people who had been subjected to Halloween worship ceremonies. Cats would go missing because of sacrifices. Tainted candy hurt children and I felt the pain of those victimized. The holiday became pure anxiety and dread for me. Continuing in the belief that it was acknowledged at all, something of my faith would be taken away. My connection with God would weaken and I would be all alone. The day came to represent my darkest fears and deepest nightmares.

Yet Divine Love is the perfect teacher. Every prayer is answered and I learned to look at God as my loving Creator. My focus turned from what He couldn’t do to what He could.  I began to think of the message I wanted to share on the night. As a family we participated in different things; Harvest Festivals, family theater nights, pizza and movies. I met a woman who had the same struggles. She celebrated delight by decorating her house with lights, doors were open and candy handed out liberally. Through her example fear began to lose its hold.

In BoyA’s the class observed Dias de los Muertos. He learned the truth of how holiday was celebrated in : they do not celebrate death, haunting and evil. The belief is: loved one’s spirits come back and they have a night to celebrate with the living. BoyA created a memorial for his Uncle, who had committed suicide the previous April. For the first time he talked about his uncle’s death. As BoyA created his own story of Uncle, his soul was able to heal. This holiday no longer needed to be filled with horror and dread. It could be about celebration and remembering.

The cherry on the sundae was The Counting Mutant.

“Do you want to go to Rocky Horror this Saturday at midnight?”  Mutant asked sheepishly.

My soul jumped with delight, “YES!”

He arranged for tickets. We double dated with a friend and her husband. The Mutant and I spent the day on Saturday together collecting props and making kits. Giggling like kids, we shopped for our costume’s bits and pieces. I was amazed at the freedom I felt preparing for this seemingly forbidden thing.

Sitting in the theater, the four of us admired the bravery of many.  Peter Pan dressed in a vine covered Speedo won the costume contest. Anticipation rippled through the sold out crowd. The film started and we were united. All yelling, singing, and covering our heads with newspapers; the highlight was when everyone threw toilet paper.  The theater’s beautiful old ceiling covered with storms of arching toilet paper rolls unraveling. We were covered with tails of gentle white. I checked within myself. God still loved me.  I still felt close to Him.  He didn’t leave me. As the film came to its conclusion and I recognized a subtle morality within the film. Those who are evil ruled for a season yet in the end they are destroyed by their own. 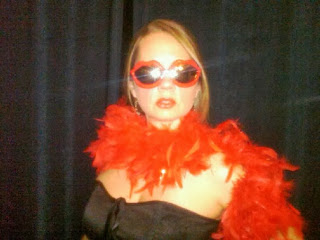 Exiting through the oddly dressed crowd into the cold breath of the night, I felt safe and warm. I was still me. Nothing was riding on my back or taking over my conscience. I still believed in God and He still loved me. I still need to be wise in choosing the influences in my life, yet I no longer need to be afraid of those influences being greater than the Creator I believe in.  I am loved.

Posted by froginparis at 2:00 AM