Daughter and the Dead Cat

I pass a hedge of Oleanders on my morning walk with dogs. Tucked under one laid a beautiful white, orange and toffee colored calico cat. It looked peaceful resting in the shade but as the dogs began to investigate, it did not move. The cat had ceased to be.

As the days passed, the cat composted. I assumed the gardeners would pick it up. I walked in denial of the cat’s existence. Weeks later, a glimmer of white caught my eye; all that was left were bones.

I heard a whisper in my heart, “That’s for GirlyK.”

That thought was lunacy-what 8 year old girl would want to look at a dead, gross cat skeleton? I walked in the door.

“Girly.” Shaking my head NO like Subliminal Man, “You wouldn't want to go see a decomposed cat, would you?”

Eyes brightened and she squealed, “YES!”

We jumped in the car to drive around the corner and I explained the event. I parked. She floated to the cat. After some encouragement the scientific study began. After a while, I said, “We need to get started on school work.”

Reluctantly she walked back to the car with me.

A voice came out of my mouth. “Would you like take the skull home?”

I cleaned it, glued the jaw and skull together then put it in a plastic peanut butter jar.  GirlyK proudly displayed it among the fairies in her room.

Not many days later, an adolescent gray tabby lay in repose under the Oleanders. I heard a voice, “It is for GirlyK. If you ignore this one there will be another.”

Thoroughly perplexed and not wanting to add to the demise of another cat, I told GirlyK. Big green eyes sparkled. We went to look at the new kitty. At first she was timid. With an uncomfortable sigh, I picked up a stick and stepped close. GirlyK shadowed. We talked about the process and I asked if she wanted to keep a journal and check it every day.

Next morning, I came in from my walk and met eyes sparkling with anticipation. The daily observations began. I stayed in the car as GirlyK lilted to her cat, Fluffy. After 5 to 10 minutes of exploration, she danced to the car. Singing at home, she drew in explicit detail. 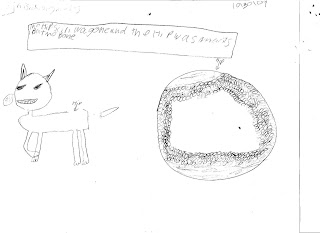 One day, as she was drawing, she asked, “Do I have to draw all the maggots? The stomach was full of them and they are so little.”

I needed a reality check and called my sister. That was a failure.

Sis, took a forensics class which involved a field trip to the coroner. She became excited. My trip into the twilight zone was spreading.

That Saturday, Sis and GirlyK ventured off together with textbooks to explore Fluffy together. When they got back, Sis said, “You know, at the coroner’s office, they put bodies into a crock pot to clean off the bones.”

I told her to shut up and thank you for coming over.

After 3 weeks the cat was pretty well cleaned. Only toes and a bit of tail flesh were left. Sea Green eyes pleaded, “It would be SO nice to collect the whole thing and put it in my room as a decoration.”

I was very clear: the skull. That was all. I didn't know how to process the whole thing and put it back together. She talked me into shoulder blades.

I was never more thankful for ignorance.

The idiot that I am shared my escape from bringing the whole thing home on Facebook. A sweet friend- biology major and fellow homeschooler- responded if I had she could have helped us.

Somehow, someway, GirlyK would find out that Friend could have helped and then those eyes would have turned with disappointment to me. Woulda, coulda, shoulda….

We went to collect Fluffy. Wearing latex gloves, SHE picked all of it up and put it in a large ziploc bag I held open. At Friend’s house we carefully placed Fluffy into a camping pot, placed it on the barbecue to boil off what remained.

After an hour, we checked on Fluffy, my heart sank. As much as Friend wanted to help, the project was too big. I cleaned off what I could, put it in a container and brought it home.

I called Sis whine about the failed attempt. She sweetly replied, “You know, at the coroner’s they…”

“Shut up! I am not putting a month long dead cat in my crock pot.”

I looked at the thing. It was not ready to put together and not fit to be called a cat. I looked at her pages of beautiful journal drawings. I snapped.

I pulled out the crock-pot, plugged it in outside. GirlyK put Fluffy in with a splash of water. I turned it on and walked away.

The next three days I sat outside with GirlyK. Crock-pot in between my knees, I scrubbed bones with a toothbrush. She, with a cat skeleton map, cataloged bones and labeled their zip lock bags. Never was a little girl more in her bliss. 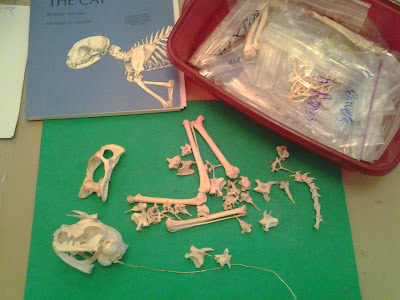 Update: The cat still sits, waiting for re-articulation on a table in the kitchen. Maybe this summer Fluffy will be put together and hang peacefully in GirlyK's room

AND the crock-pot? A month later, I was desperate and a new one was not in the budget. After a scrubbing and through the dishwasher twice, I chucked dinner in it. When everyone sat down, I put it in the center of the table. The Counting Mutant looked at me.

My eyes threw daggers and acid dripped from my voice, “I don’t want to hear it! Dinner needed to be cooked and this was all I had.”

“Well,” The Mutant paused, “It is meant to cook meat. Meat is a dead animal, so… I see no problem.”